MOSSBERG MAVERICK 88 12 GAUGE 18.5″ 6RD 31023. The working man’s shotgun, the Maverick Line of pump-action shotguns are proven performers – equally at home in the woods, upland fields, or on home security duty.

SPECIFICATIONS OF THE MOSSBERG MAVERICK 88 12 GAUGE

A good shotgun will offer you one of the best forms of home defense. Yet, it can also be a strong multi-purpose all-rounder if you choose the right one. Plus, they can be affordable, super effective, and very reliable.

The problem is there is a huge market for these guns. And, with so many options on the table, which one do you go for?

Well, in this review, we’ll run you through the pros and cons of the mighty Maverick 88 pump-action shotgun. And, this is a gun that’s almost fully interchangeable with Mossberg 500 parts, which gives you plenty of scope to personalize and improve on this weapon for particular needs. 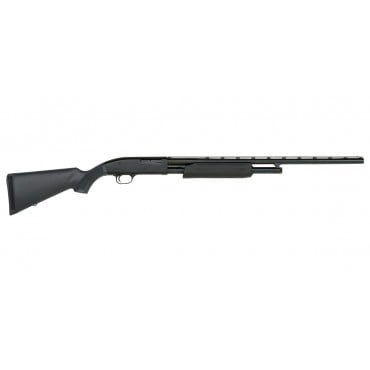 Where Did It All Start?

Over the years, they began specializing in a whole range of shotguns, rifles, scopes, pistol, and firearm accessories. And, now Mossberg is a world-renowned American firearms manufacturer.

So, where does Maverick Arms come into the picture?

Well, in 1989, Maverick Arms, a corporate affiliate of Mossberg, opened up a factory in Texas as a reaction to rising labor costs and foreign competition. This facility was hugely expanded in 2013 due to its successes. And, today they are known for producing high quality yet affordable firearms, such as the Maverick 88 pump-action shotgun.

So what Distinguishes the MOSSBERG MAVERICK 88 12 GAUGE from the Mossberg 500?

The MOSSBERG MAVERICK 88 12 GAUGE is almost identical to the highly acclaimed Maverick 500 shotgun. But one key difference between both guns is the manufacturing process.

The 88’s assembly is carried out in Texas, but parts of the gun are made outside of the USA – predominantly in Mexico. This drives costs down, especially in comparison to the 500. And, it ultimately benefits you, the consumer.

Everything but the trigger…

The other major difference is that the trigger groups on each rifle are not interchangeable. Apart from that, you can pretty much swap out nearly all the main parts from each shotgun as you wish.

For example, you could add a Mossberg 500 barrel, stock, and magazine tube to your Maverick 88 with little effort. Though we should point out the barrels should be of the same length to do this. And, the guns should be within the same gauge and caliber categories.

While the Mossberg 500 series utilizes a top tang safety, the Maverick 88 shotguns feature a trigger guard-mounted cross-bolt safety. Also, the 88 does not come with a pre-drilled and tapped receiver for scope mounts, but the 500’s do. Nor does the 88 have any swivel mounts like the 500.

Lastly, the finishing on the 88 is a high-quality steel bluing, which is a little more basic than the 500’s factory-blued nickel or parkerized finishes.

In total, there are four types of Maverick 88 shotguns to choose from. Models include the All-purpose, Security, Security with Top Folding Stock, and the Slug version.

What About Capacity of the MOSSBERG MAVERICK 88 12 GAUGE?

It’s also worth noting if you want to load shells into any of the models, you’ll be limited to four in the tube and one in the chamber.

The MOSSBERG MAVERICK 88 12 GAUGE All-Purpose model comes with a factory-installed black synthetic forend and stock, plus a fixed cylinder bore. Sling swivels are not included in the factory set-up, but they can easily be added onto the shotgun so you can use a sling.

The full length is 45.25 inches, and it has a 14.25 inch length of pull. The chamber size is 3-inches, and the choke is a modified tube design. It includes a front brass-bead sight that functions well for close to mid-range targeting.

Quick as a flash…

You also benefit from dual extractors. This means the casings from your previously fired cartridges can easily be dispensed with, and new rounds can be loaded quickly.

Furthermore, there are twin action bars in place to prevent binding and twisting in the gun. These will produce cleaner and more reliable follow up shots. Plus, there’s a positive steel-to-steel lock-up and anti-jam elevator that adds to the fluid functionality of this weapon.

It also features a polymer made trigger housing, which is essentially a rounded trigger guard that prevents the bow trigger from going off unintentionally.